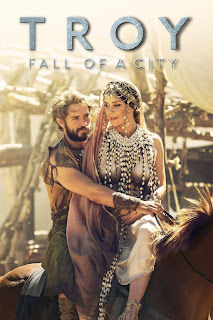 I completed watching this movie after a very difficult mind acceptance adjustment. I personally just can't brain why Netflix changed the colour for Achilles, Zeus and others (inclusive some of the Greek Gods)? These characters are not black or negroid. They were white! The images depicted them are all white with Caucasian characteristic (nose, lips etc). By doing this (changing), it is a racist act indirectly. Netflix being racist to the black and the white. By doing this also, it shows that Netflix also has no respect the heritage and culture of the Greek people.

Anyway, the drama is OK (beside the racist move by Netflix). It is not an action drama but a politic drama. Thus quite enjoyable but at time a bit draggy.

The Implicit View Of Trojan War

What really happened in Troy? The story that popular culture familiar may be a bit romanticize base on the people of ancient view things. The story obviously heavily saturated with myth and fantasy. I personally see it a bit differently.
I think the real evil in this epic was Helen. I think she was like Matahari, a spy that purposely seduced the weak Paris into falling in love with her. The whole tragedy was a manufactured ploy to destroy Troy which was a rival to the Greek. Her acted was soo great that the week Trojan royalty been fooled by her acted.

The story has many questioned motives. If we were study the plot by plot carefully, we can see that all the act concerning Helen from the depart to Troy, lives in Troy than later rejoin with her husband (Menelaus) were too smooth for her. She may had even master the act of persuasion and may have the ability to create drug that make Paris to become a fool to her. I also think the Trojan horse idea was also partly contributed by her after she studied the Trojan culture and saw how stupid and superstitious the Trojan were.

To cover her innocent and and still gave pride to Menelaus they blame the Gods. Obviously the ancient people are very superstitious and would easily been fooled.